NB. This garish front page doesn’t have much to do with the topic. But I like it.

The Brits absolutely love rhyming and / or alliteration. From Cockney slang to the ubiquitous “See it. Say it. Sorted.” campaign, the Brits excel in turn of phrases.

Then one night coming back from visiting a hippie collective in a “warehouse community” (as you do, in London; seriously there are warehouse communities and they are pretty fabulous), I saw the following sign:

That’s catchy, right?  I can’t help but hear it as a song:

Oh and by the way, the Metropolitan Police (“The Met”)and Scotland Yard are one and the same. And the country of Scotland has nothing to do with it. The first police station was on a street called Scotland Yard.  (Ahhhhh, I can hear you say. )And did you know (bet you didn’t) they were the first uniformed, paid professional police force in the world? Founded by Robert Peel in 1839 when he was Home Secretary. (He later became Prime Minister under Queen Vic.) They are called Bobbies because the guy’s first name is Robert. Get it? Robert… Bobbie? They tried calling them Peelers but that didn’t stick.

A bobby; but his name was probably Conor.

And, of course there’s good old Keep Calm and Carry On. But did you know that it wasn’t terribly used during WWII? Nope. It was barely known and entirely forgotten about until a copy of a poster was found in a bookshop in a small town in Northumberland in 2000. Then we ALL heard about it. 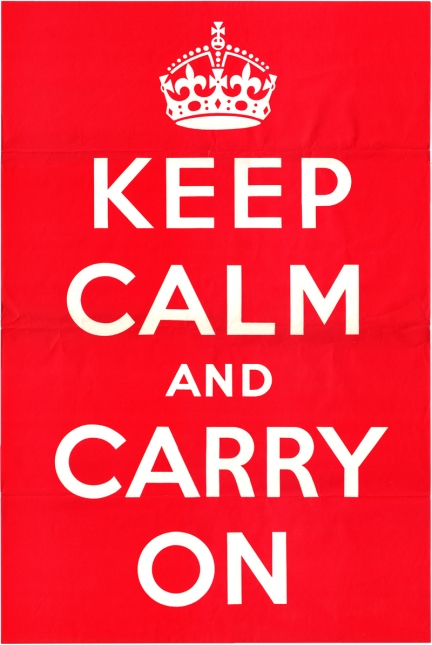 And heard about it and heard and heard. And heard different versions.

And more and more versions. On cups and then of course, tee shirts. Everyone, even entomologists, had their point of view:

Until finally, the self-referential:

So, the lesson learned? Brits read trash newspapers as much as any American I’ve met and can copywrite as well as the next dude.